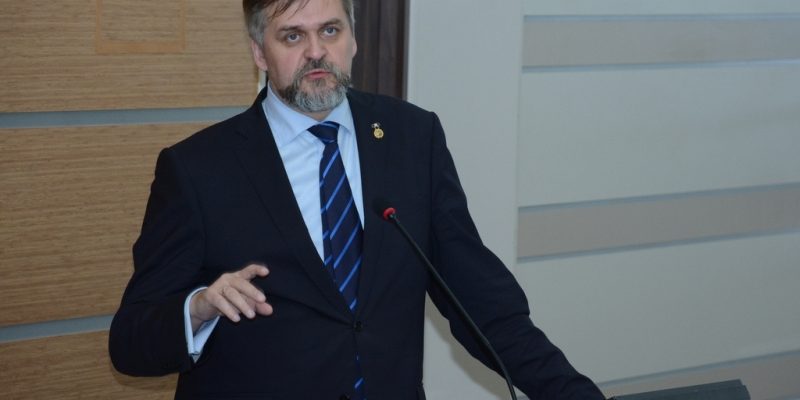 On October 6, a scientific seminar entitled “Electronic Money: Current Status and Prospects for Development” was held in the UNEC audience with the participation of Ruslan Makarov, a well-known Russian expert on the digital economy and electronic finance.

President of the International Fund “Humanity”, doctor of juridical science Ruslan Makarov developed the theme of monetization of cultural values ​​when combined with modern trends in the digital economy and electronic finance (electronic and smart money, crypto-currencies). He closely participated in the creation of monetary units of crypto-currency and electronic money in Europe and Asia. The author of scientific monographs on law, philosophy and ethnology, Makarov, real corresponding member of the Russian Geographical Society, was awarded prestigious international and state awards.

During the seminar, the president of UNEC Research Foundation, Farhad Amirbekov, explained to students that the electronic economy is a new foundation for the development of management, business and the social sphere, as well as society. He also noted the important role of electronic finance in the global world, considered the main trend in the dynamics of economic development, increasing fruitfulness, creating new markets and industrial sectors, and ensuring sustainable development.

In turn, Dr. Ruslan Makarov presented detailed information on the concept of “electronic money”, their functions and distribution in the world. Speaking about the goals and tasks of creating electronic money, Makarov spoke about its application in various cities that have reached a powerful economic development, as well as the positive results of the use of electronic money in different countries.

Rector of UNEC, Professor Adalat Muradov noted that the economy began to take a completely different character and this economy requires new types of services. Speaking about the features of electronic money, the rector noted the importance of researching the results of the application.

“If in the world the benefits of electronic money are mainly spoken by specialists in banks and computers, in Azerbaijan this initiative should be taken up by UNEC scientists and develop proposals that justify the importance of electronic money. If necessary, on the issue of electronic money, UNEC experts can give appropriate recommendations to the government” – the rector emphasized.

As the first step the rector named the release of the next magazine “Expert UNEC”, dedicated to the issues of electronic money and crypto currency, spoke about the prospects of using electronic money in Azerbaijan, and also gave an analysis of their dangerous sides.