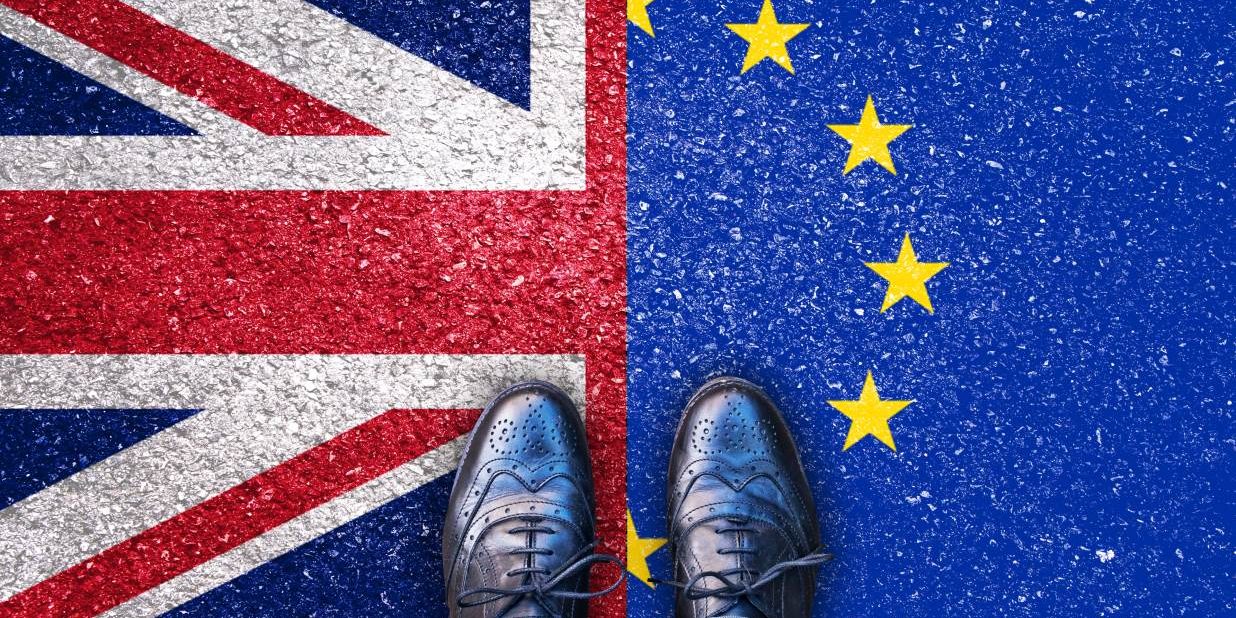 In June 2016, the United Kingdom held a referendum on its membership in the European Union. Although Britain was expected to unanimously back remaining in the Union, 52 percent of electorate handed a surprising decision to ‘exit’ EU.  Brexit – British Exit – is expected to be triggered by 2019. In post – WW2 period, the world, but mainly Europe have launched the period of Globalisation and integration, in order to hamper the mistakes of the past. Nonetheless, the Brexit is a sign of abandonment of this trend. The United Kingdom will drift away from supranational EU regulations, and hence face the difficulties in freedom of movement of goods, labour and services with almost 30 member states. Main question arisen from Brexit is whether the process of “de-Globalisation” is inevitable and what future the EU will face.

The anti-EU campaign in Britain had started after Maastricht Treaty of 1993, which marked the beginning of the single monetary policy and the European single market, and has lead to the 2016 ‘Brexit’ referendum. The main advocates of Brexit were not from two major parties – Conservative and Labour – but from single issue parties, most notably the Referendum Party and the United Kingdom Independence Party (UKIP). These parties claimed that historical might and sovereignty of the Great Britain allowed to disregard political power with the European Union. Ultimate string of disagreement was over British government’s commitment to notion of free movement of people and to accept the jurisdiction of ECJ – the European Court of Justice.

Who voted for Brexit?

The referendum results have demonstrated that less-educated and older people were keen to vote ‘leave’. 60 percent of Brits aged over 65 voted to leave, compared to less than 30 percent of youngsters aged 18-24. Only 41 percent of referendum participants with university degree chose to vote ‘leave’, compared to almost 70 percent of those without a diploma. A majority of white voters wanted to leave, but only 33 percent of Asian voters and 27 percent of black voters chose ‘leave’. Interestingly, even though ‘Brexit’ campaign has not received a support of major parties, wide range of British political spectrum backed leaving the EU. More precisely, almost 60 percent of Conservative voters supported initiative, as well as 37 percent of labour party supporters and almost the same percentage – 36 percent – of Scottish National Party proponents. Higher average age of Brexit advocates shows that those who hold more conservative political mind thought that Britain within the EU was getting worse. Such as, 74 percent of people who claimed that feminism is a ‘force for ill’ voted to leave, compared to 38 percent of voters who thought of feminism as a ‘force for good’. Therefore, conservative belief, rejection of multiculturalism policy, education and age were the demographic factors affecting the voting behavior of general population.

The unexpected result of the 2016 Referendum and the launch of Brexit negotiations are certainly going to shake up the future economic, trade and political relations in the region, if not the world.

Consequences for the UK

British population will certainly achieve its goal of prohibiting free flow of people – the primary reason of ‘leave’ votes.  After the referendum, the UK government would be able to reverse the tendency of increase in number of Middle Eastern refugees.

One of the biggest disadvantages the government will face is the slow of growth. According to Philip Hammond – the UK’s chief Treasurer – the average growth for the next three years would drop to 1.9 percent.

Another huge blow to Britain’s economy would be loss of tariff-free trade with member states of EU.  Tariffs will raise the cost of exports for British companies, making them higher-priced and less competitive. Simultaneously, import prices will go up as well, which can result in inflation and damaged standards of living for general population of the UK. Certainly, these developments would be baleful for The City, Britain’s financial core. The city might loss its position as a base of entry into the EU market for English-speaking companies of the world. Subsequently, it can possibly result in the collapse of the real state, one of the most appealing sectors of economy for outside investors. Moreover, UK banking sector is under a threat of losing ability to operate in EU member nations, as the BREXIT might also raise the cost of communications, internet and even phone services.

Most importantly, Great Britain’s territorial integrity is under threat, as Scotland will try to join the EU on its own, as of the example of the kingdom of Denmark. Last, but not least, Scottish National Party (SNP) leader has announced the possibility of another referendum of independence.

Consequences for the EU

Post-Brexit negotiations between the UK and EU can take up to two years, and as Angela Merkel stated, the patience will give the best outcome for both parties. However, the referendum had immediate impact on politics throughout the Union.

Right-wing anti-immigration parties in Europe can gain strength as a result of Brexit vote. If these parties gain more ground in Germany or France, they could trigger anti-EU movement. If either of two countries comply with those movements, it can gradually lead to the denouncement and destruction of the European Union.

On the other hand, many policy-makers and officials of Europe began to feel more cohesive. The British representatives in the EU mostly vetoed new policies of the organization. IMF director Christine Lagarde believe that decision-making will be more efficient as “Now the British are going, Europe can find a new plan”. (Christine Lagarde)

Both parties are eager to sign a new free-trade agreement in order to reach a smooth transition. However, new deal between Britain and European counterparts is unlikely to be achieved in the nearest future. Taking into account, the case of EU-Canada trade agreement which came into force last year, but only eight years after the negotiations were triggered, the UK-EU will certainly have to achieve an interim agreement in the period of post-Brexit negotiations.

The future of the region is still uncertain as there a lot of disagreements even within the EU itself, and hence all the forecasts remain blank until the final agreement is reached.

We live in an era of globalization, where the economies and politics of countries from around the world are integrated and interrelated. Indeed, recent developments in Europe will affect the rest of the world. Without any doubt, for last couple of decades Azerbaijan was on a path of rapid integration with Western hemisphere and therefore, BREXIT will impact Azerbaijani-European relations.

BREXIT has given a motive for separatist and right-wing encouragement across Europe. Results of Catalonian Referendum were carefully watched in Baku as it could have lighted similar burst in the region and hence, disrupt Azerbaijan’s position about ‘separatism’ in the Nagorno-Karabakh (NK). Until today standpoint of European states have remained unchanged towards NK, and territorial integrity of Azerbaijan is still supported, nonetheless, dynamic of changes in Europe can possibly transform conventional viewpoints.

Secondly, London was an essential defender of Baku interests from inside the Union, advocating various large international projects to Europe, such as TANAP – Trans-Anatolian gas pipeline to Eastern Europe through Turkey. Britain’s interests in energy sector of Azerbaijan have allowed the latter to promote initiatives more efficiently to EU nations and achieve pro-Azerbaijani resolutions on the Nagorno-Karabakh conflict. Certainly, BREXIT wont lead to the completion of cooperation with Brussels, but will make it difficult for Baku to receive a necessary support from EU with London’s absence.

British companies are one of the biggest investors in Azerbaijan’s oil and non-oil sectors. British Petroleum (BP) is the leading participant in most of the energy projects of Azerbaijan. Over past two and a half decades, the UK has invested almost 30 billion dollars in country. It is safe to argue that Brexit won’t decrease Anglo-Azerbaijani cooperation, on the contrary, potential departure from the European market might increase foreign direct investments from British companies. What is more, recently Azerbaijan is viewed as a transit country between Western and Eastern financial interests. Azerbaijan, alongside China and Kazakhstan, is the key playmaker in recently-admitted ‘One Belt One Road’ project. At the centre of East-West border, a small Caucasian country can heavily integrate into large EU market, as the TANAP project has demonstrated. However, from economic point of view as well, without Britain in the Union, Azerbaijan would experience difficulties in addressing its interests.

The referendum of June 2016, has shaken the European politics in many ways. BREXIT has immediately demonstrated its negative impact on Britain, Europe and even on the US dollar. Despite the common agreement on negative impacts of Brexit on the ‘Old World’, there are some opinions advocating positive consequences of Brexit for Azerbaijan. Without any doubt, British foreign policy-making would become independent from European supranational organisations, meaning that the House of Parliament can be more involved in restoring the stability in the South Caucasus and, most importantly, resolving the Nagorno-Karabakh conflict. Also, as mentioned in previous paragraphs, London will be interested in maintaining or even increasing the flow of Investments to Azerbaijan.

It is not a secret that there is a decrease in a mutual trust between the EU and Azerbaijan, following the collapse of Greek economy. In this regard, Brussels will have to increase trade links with the latter, in order to insure high economic cooperation with small, but strategically important states like Azerbaijan. As mentioned, Azerbaijan is in the epicentre of new west-east projects, and hence, the full engagement with Azerbaijan will neutralise negative effects of Brexit and possibly, prevent Azerbaijan from falling into pro-Russian Eurasian Economic Union, securing for Azerbaijan potential political rapprochement with the West, which Azerbaijan currently desires.

Anar Valiyev, ‘Brexit and its Impact on Azerbaijan: Will East-West Integration Be Harmed?’, PONARS Eurasia, 2017 < http://www.ponarseurasia.org/memo/brexit-and-its-impact-azerbaijan-will-east-west-integration-be-harmed>

Kimberly Amadeo, ‘Brexit Consequences for the UK, the EU and the United States, The Balance, 2018 < https://www.thebalance.com/brexit-consequences-4062999>