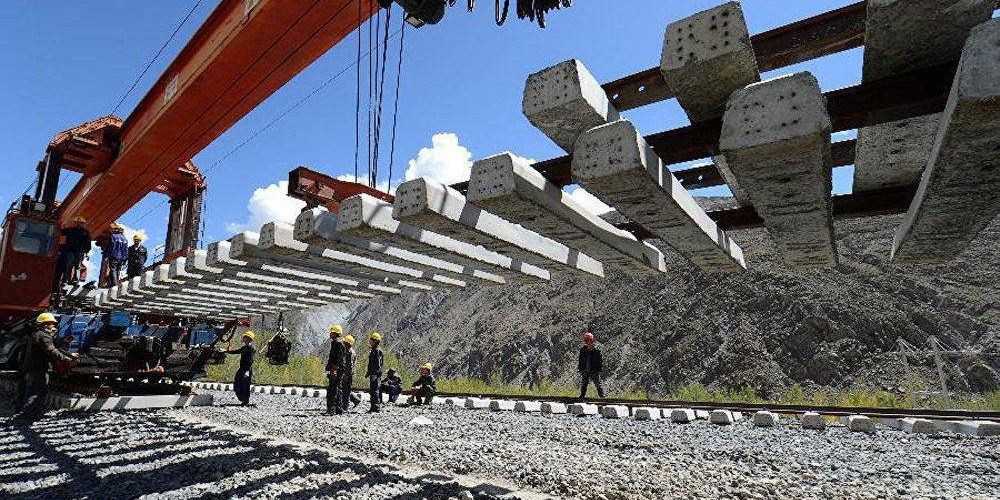 To what extend the North-South transport corridor is more desirable and beneficial for Azerbaijan’s interests in the region?

Since gaining its independence in 1991, Azerbaijan has been truly active in developing oil and gas sector of the country. Accurate decision-making of the government authorities has attracted billions of foreign direct investment throughout two and a half decades. As a result, Azerbaijan turned into one of the most rapidly developing countries in the region, increasing economic ties with neighbors and strategic partners. Despite the worldwide oil price shock, Azerbaijan is still heavily dependent on the hydrocarbon sector. Contract of the century, launch of the South Gas Corridor in the end of the previous century, development of the second phase of Shah Deniz project (through TANAP and TAP pipelines), often called “Contract of the 21st century”, cemented Azerbaijan’s image as a trustworthy partner in energy matters, and safe transit zone. Aforementioned developments, led to Azerbaijan’s irreplaceable role in realization of East-West and North-South transport corridors. However, participation in projects of this scale will make Azerbaijan face some serious difficulties. Which transport corridor should be prioritized by authorities of a country? Should Azerbaijan concentrate on North-South trade project for improving its bilateral ties with Russia and Iran or lift up existing relationship with China through “New Silk Road” initiative? Only time will give answers to the raised questions, nonetheless, long-term perspective of our government has to be a vital point in decision-making.

Initial thoughts about the corridor are dated back in 1993. Only towards final months of 2000, India, Iran and Russia have signed a memorandum, which was recognized two years later. Azerbaijan, in turn, became a part of historic agreement in 2005. In spite of accelerating developments of the initiative, the project has been put on hold for a little more than a decade, due to western sanctions against participating Iran.  With the change of Western attitude and halt of sanctions against latter, project was revived again. The total length of the corridor is expected to be more than 7,000 kilometers, with 30-50 per cent of a total length, depending on the route, running on the Russian soil.

Not only the North-South project is of vital importance for future Azerbaijani-Russian interaction, it also carries huge role in establishing new faster trade routes between Southern and Northern Hemispheres. At the moment, goods are shipped via Persian Gulf, the Suez Canal, the Mediterranean Sea to ports of the Northern Sea in one and a half months at quickest, the North-South corridor, however, will decrease that time to less than a month. Therefore, whilst India, Iran and Russia are the masterminds behind the project, many parties are interested in the earliest completion of the idea.

The East-West project or ‘the New Silk Road’ is the initiative of reconnecting energy, transportation and trade links of Asia and Europe, which have been cut away by a century of conflicts and antagonism. Silk Road economic belt is an objective developed by China, to open access to European markets via road and rail routes. The belt connects Chinese economy with that of EU via Kazakhstan, Azerbaijan, Georgia, Turkey and/or Ukraine. From the geographic point of view, Azerbaijan could potentially turn into a central transport hub in the future.

Location of Azerbaijan on the convergence of both routes would result in increased stability of a dazed economy and continuous flow of investments, which in turn are going to bring further prosperity to the country. By the end of 2020, expected number of containers to be shipped via Trans-Caspian International Transport Route (TITR) of ‘the New Silk Road’ is almost 400,000. Beyond any doubt, this will spawn enormous revenue, only from a transit fee. Above mentioned Sea Port of Alat, which turns into one of the largest trade ports of the Caspian Sea, elaborates a capacity to receive and ship 15 million tons as well as transport 100,00 containers annually. Being a transport hub of two corridors, Azerbaijan will receive a chance to export products to European and Asian markets on a lower tariff, as well as import vital goods from around the ‘Old Word’ in shorter period of a time. The markets, which have been a distant reality for decades are standing within arm’s reach.  All in all, modern infrastructure, telecommunication, roads and rail networks, as well as modernized ports and airports, developed in order to acquire role of a valuable transport hub, will boost the national economy and local exchange of goods between the regions of a country. Finally, Azerbaijan is going to obtain a long-awaited, and certainly historic opportunity to diversify economy and build a solid non-oil/gas sector of economy.

Why Azerbaijan has to concentrate on North-South transport corridor in short-term perspective?

China is initiating to rebuild, arguably, the biggest trade route the humankind has ever seen – the Silk Road. It is one of the biggest opportunities, yet a great challenge for Azerbaijan, as there are several difficulties that project faces at the moment.  The biggest proportion of the corridor runs through Central Asian states of Turkmenistan and Kazakhstan, who carry a strategic weight for Russia and China, two major actors of the region, who have unstable relations with the West (note: negative attitude of the west towards Russia, due to recent events in Kerch Strait, and the US’s trade war with China). Needless to say, riches of Central Asia are of a greater interest for EU, which seeks alternative energy routes and sources to satisfy its natural gas demand. The East-West transport corridor grants an access for western actors in face of the EU and the United States, thus, changing the balance of powers in Central Asia. Certainly, China will not rush without taking into consideration such a development of events in the region.

Additionally, even though Russia together with China feels negative incentives towards west, the expansion of the latter as the new superpower and the only counterbalance to the West, makes Russia’s status quo over Central Asia questionable. Russia applies all the levers to keep post-soviet satellite states under own zone of influence and clearly, development of huge regional projects by Chinese initiative might ruin these objectives. Despite the tremendous cooperation opportunities to be possibly brought by the East-West transport corridor, abovementioned factors make the soonest realisation of the project extremely difficult, as the risk of losing spheres of influence to the rivals is on the agenda.

On the opposite side of the scales, the geopolitical importance carried by the North-South transport corridor is vital for Azerbaijan’s firm position in the region. Another regional project with Friendly Russia will bring neighbouring Azerbaijan and Russia even closer and further increase economic and political cooperation on certain matters. As stated by many political analysts “The North-South project” is one of the clearest examples of increasing political interaction between Azerbaijan and Russia.

Due to religious distinction above all, Turkey and Iran are geopolitical opponents. Clashes in Syrian War between pro-Iranian Shiites on one side and pro-Turkish Sunnis on the other are clear example of a rivalry.  Nonetheless, development of the corridor grants brilliant opportunity for Azerbaijan and Russia to reconcile Iran and Turkey, considering good level of relations between Russia and latter two. Broader regional alliance among all four states is hard to achieve after all, but reconciliation of two major players in the region is more than possible. In case if Azerbaijan, together with Russia will be successful in reconciliation of regional powers, substantial advantages – mainly development of future projects without any major obstacle – are highly achievable.

For many years, Azerbaijani has successfully isolated neighbouring Armenia from each of the regional projects, due to latter’s refusal to withdraw troops from the lands of former; the project of discussion is not an exception. In addition, one particular advantage has received little attention. The trilateral cooperation between Azerbaijan, Iran and Russia formed by the project will certainly enhance Azerbaijan’s position in resolving the Nagorno-Karabakh confrontation. For more than twenty years, cooperation in form of Moscow-Tehran-Yerevan was functioning, nonetheless, the North-South project has a power to form Baku-Moscow-Tehran triangle, which will significantly push Armenian officials out of cooperation with Russian and Iran. Indeed, active involvement in major regional projects displays Azerbaijan as an attractive trade partner for almost all the neighbouring states, including Russia and Iran.

Azerbaijan has been playing a leading role in implementation of many regional projects in recent years. Turning into one of the most rapidly developing economies of the world, country has proved itself as a valuable partner for regional and global decision makers. Azerbaijan is ready to open a new striking chapter of its history by being part of immense international projects – the North-South and the East-West transport corridors. Without any doubt both developments will bring billions of dollars to national economy through deeper cooperation with neighbours and international players. However, centralisation of energy and attention on the North-South project is more beneficial. In reality, Azerbaijan is not a primary decision-maker in the region, at least for now, and reliance on Russia is unavoidable. Success of the East-West corridor is a threat to status-quo of Russia in Caucasus and in Central Asia. Thus, total endorsement of Chinese initiative can result in alienation of Azerbaijan from Russia, which is unnecessary progress of policy at the moment. On the other hand, the North-South project carries a significant political value for Azerbaijan. Apart from establishing itself as an important regional player, improvement of trilateral ties with Russia and Iran is an example of how expanding economic value leads to growing political influence. Most importantly, the North-South transport corridor has a potential to give Azerbaijani authorities a trump card in negotiating a desirable agreement over the Nagorno-Karabakh region. All in all, the North-South corridor gives much wider economic and political opportunities for Azerbaijan in foreseeable future.

Mahir Humbatov, The South Caucasus-centred Transport Hub: The Crossroads of the East-West and the North-South Corridors, 2017, retrieved at: http://sam.az/uploads/PDF/The%20South%20Caucasus-centred%20Transport%20Hub.pdf