IMPACT CAPABILITIES OF THE WORLD BANK  DEVELOPMENT OF AGRICULTURE IN AZERBAIJAN

The World Financial Institutions are financial support for economic and social development activities in developing countries, providing professional advice and promoting international economic co-operation and sustainability.The priority of the World Financial Institutions’ activities is dedicated to the world-class living standards and literacy, with the support of important projects and programs for the elimination of debts of emerging economies, resolving global issues and poverty reduction.Our country is also cooperating with the World Financial Institutions to implement a number of major projects. The first place among the donors of the foreign loans received by Azerbaijan is the World Bank, one of the largest donor organizations in the world, which serves the goals of economic development in the world. The next places were shared between Japan International Cooperation Agency, Asian Development Bank, EBRD (European Bank for Reconstruction and Development), Islamic Development Bank and other international financial institutions. 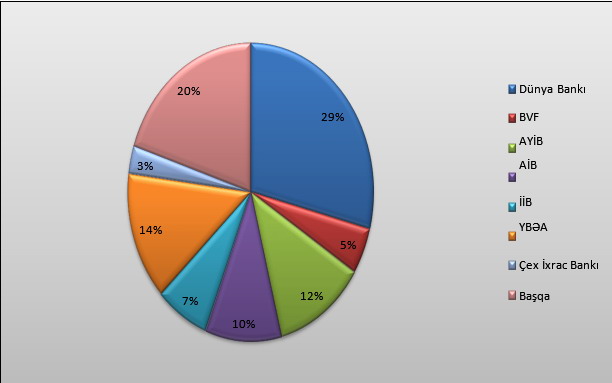 The World Bank, which is a major component of the World Financial Institutions and transformed into a global power today, acts as both a unified and donor lender, and lends itself to a complementary business to developing countries.The World Bank uses its financial resources, highly qualified staff and extensive database to help every developing country grow in a sustainable and equitable way throughout the world.Although the World Bank has provided extensive development programs for developing countries, some programs are specifically designed for poorer countries.The World Bank’s report on East and Central Europe states that 38 per cent of the 4.4 per cent increase in agriculture in 2015 led to the maintenance of the income of the country’s population working in this area. According to forecasts of the World Bank for the country growth in agriculture was expected to rise by 4.2% in 2016 and 4% annually in 2017 and 2018 respectively. Even according to the forecast, Azerbaijan will be the first among Caucasian countries to develop this area. In view of these forecasts, it is considered to be the priority for the World Bank to influence agriculture development in Azerbaijan and the effectiveness of implemented projects.

The World Bank has been cooperating closely with our country for 25 years. The total amount of investments made in our country within the framework of 50 projects has exceeded  3.5  USD billion. These projects include various sectors such as governance, healthcare and education, financial and infrastructural sectors Our cooperation with the World Bank is based on the Country Partnership Framework, a joint strategy. Currently, the Country Partnership Framework covers the years 2015-2020 and aims to support Azerbaijan’s economic, sustainable, inclusive and private sector-led economic development. The following activities have been undertaken within the 25-year partnership between the World Bank and Azerbaijan: [4]

Transition period of 25-year partnership between the World Bank and Azerbaijan.

Mənbə: http://www.worldbank.org/en/country/azerbaijan  prepared by the author on the basis of the information obtained.

The World Bank’s efforts to develop agricultural, irrigation and drainage networks in Azerbaijan, including rural infrastructure, are commendable. As we all know, agriculture is one of the strategic sectors of the country and meets the population’s food security needs.In general, the World Bank is implementing reform programs on transition to a market economy, macroeconomic stabilization and oil revenue management, assistance to refugees and internally displaced persons, infrastructure rehabilitation (water, irrigation, motor roads), education and health, investment in the energy sector field activities, reforms in the public sector, agriculture and non-oil sector, as well as opening new jobs.Cooperation with the World Bank under the Country Partnership Strategy 2016-2020 is being continued in Azerbaijan. The Country Partnership Strategy reflects a partnership plan based on the needs and priorities set by the Government of Azerbaijan. The World Bank has funded a number of major projects in the country related to the development of agriculture.From this point of view, we can look at the projects implemented by the World Bank in the field of agriculture in Azerbaijan, the value of the loans allocated to them:

As can be seen from the table, the World Bank has provided USD 218.4 million in the implementation of 8 projects worth USD 323.71 million in agriculture, which is 67.5% of the total value of the projects. 6 projects have already been completed. Currently, the Ministry of Agriculture together with the World Bank is implementing three major projects. The first of them is the “Second Rural İnvestment Project”, which began in 2012, and the second is the “Agricultural Competitiveness İmprovement Project” and the third is the “Second Rural Investment Project Additional Financing” project, which began in 2014.The extent to which the finished projects affect the pace of agricultural development in Azerbaijan draws attention.

Initially, it would be advisable to pay attention to the dynamics of agricultural development in the period covered by the 6 completed projects. Taking into account that the global financial and economic crisis that took place in 2008 reflected itself in the economic indicators of many economically developed countries of the world and subsequently moved to a global form, what changes the projects implemented during these years have to our country cause. In recent years, the total number of agricultural enterprises in our country has decreased from 666 units and income to 27.7% in 2008, the amount of loss-making enterprises and total loss and was unstable.[1] In particularly, there is a sharp decline in all indicators in 2015. The main reason for this is the high inflation rate in the country in 2015. According to the State Statistical Committee, the average annual inflation in 2015 was 4% , respectively, increased by 5.9 times compared to 2008 and animal husbandry by 1.7 times. Accordingly, revenue from sales increased 2.4 times, and the aggregate productivity growth was 154%.

Rapid development of the Azerbaijani economy is characterized by two undesirable features associated with each other. The first feature is the dependency of the state budget and oil-related enterprises and their corresponding revenues. The second factor is Azerbaijan’s very poor production product – economic activity is mainly based on agricultural enterprises, domestic goods of local significance and relatively poor service. The state budget is formed mainly due to revenues gained from the rapid development of the oil sector. Although the development of the oil industry has great potential for the non-oil sector and economic development in the regions of the country, the sharp differences between the capital city and regions on sustainable economic development and development prospects availability, production areas and service sector development.[3] The World Bank and other international organizations emphasize that increasing the competitiveness of the non-oil sector, particularly in agriculture, is crucial for the country’s sustainable development. It demonstrates the necessity of agricultural production to the production of higher value added products and to larger commercialization.It should be noted that the volume of GDP in agriculture in 2016 increased by 0.3 percent to 3369.5 million manats compared with 2015. However, in 2015, the share of agriculture in GDP is 6.2% , In 2016 this figure was 5.6%. In 2016, the total value of the gross output of agriculture was 5632.4 million manat. In 2016, 2986.9 thousand tons of grain was produced, which is 2.19% more than in the corresponding period of 2015.In addition, 902,400 tons of potatoes, more than 7.5 percent potatoes, 894.4 tonnes or 154 percent more cotton, 312.6 tonnes or 70 percent sugar beet in the year 2016, 1015, 7 tons or 75.4 percent more green tea leaves, as well as 1270.6 thousand tons or 0.4 percent less vegetables, 464.8 thousand tons or 4.1 percent of melons, 882.8 thousand tons and or 0.7 percent less fruits and berries, 136.5 thousand tons or 13.0 percent less grapes. On the other hand, in 2016, the country produced 302.2 thousand tons of meat, 2009.9 thousand tons of milk, 16.6 thousand tons of wool and 1609.8 million eggs. Compared to 2015, in 2016, meat production increased by 1.4 percent, milk production by 4.4 percent, egg production by 3.72 percent, wool production by 2.0 percent. The volume of capital investments in agriculture, forestry and fishing amounted to 325.1 million manat in 2016, which is 8 percent lower than in 2015. In terms of the distribution of the employed population by types of economic activity, 1729,6 thousand people were employed in agriculture, forestry and fishing, or 1.8% more than in the previous year. Exports of fruits and vegetables in 2012 amounted to USD 157.8 million. In January-June 2016 agricultural products were exported to USD 204.7 million. The volume of agricultural products exports increased by 33.5 percent compared to the corresponding period of the previous year. Azerbaijan’s agricultural exports are important products. It should be noted here that the hazelnut and palm productivity, which has a specific place in the export of Azerbaijan, is close to or higher than the world average.The rise in productivity will affect the competitiveness of our direct export products. The rise in productivity will affect the competitiveness of our direct export products.